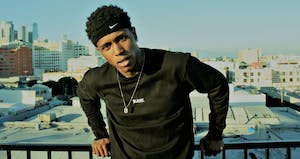 “I’m making being yourself cool again,” which is why Haiti Babii believes many who saw his bizarre freestyle on Bootleg Kev & DJ Hed’s radio show were left folding over in laughter or quizzically upset at his apparent lack of lyrical integrity.

Either way, his appearance (an off-kilter assemblage of vocal inflections) on Los Angeles' Real 92.3 went viral and earned Haiti Babii the attention of a number of celebrities in the process, including a phone call from pop empress Robyn “Rihanna” Fenty.

“She FaceTimed yesterday morning,” says a newly turned 21-year-old Haiti Babii inside BET’s headquarters. “She was like, ‘I can feel the island in you. You just have so much soul.’”

Born Amari Amil Proctor, Haiti Babii grew up in Stockton, California and listened to everything but rap: “It was too loud for me. I didn’t like that.” His uncle, an activist from Guyana who arrived to Oakland during the height of the Black Panthers movement, raised Haiti Babii on a diet of juju, soul and the blues. As such, the viral sensation credits the likes of Luther Vandross and The Gap Band as some of his greatest influences.

A true autodidact, Haiti Babii is the sole alchemist behind all his music, from songwriting to beat-making: “My mouth is an instrument because the studios I was in first was just basement equipment. I didn’t have autotune or none of that other stuff. I had to become the snare, the bass, or I would be the 808.”

Haiti Babii also writes his own rhymes, produces his own music and creates his own ad-libs, which lend to his approach to lyricism or spoken word. “You do it everyday in the bathroom, everyday in the shower,” he quips. “Everybody goes around doing ‘meeeh’ everyday, but when I do it on a major platform it’s weird.”

On the day he officially releases the audiovisual for “Blue Dragon,” Haiti Babii sits with BET to unpack the makings of his upbringing, musical background, Haitian roots, working with Hit-Boy, being charged by Rihanna with collaborating alongside Jamaican wunderkind Koffee, and so much more.

You can call Haiti Babii weird or crazy. What you can’t call him is unoriginal. Get acquainted.