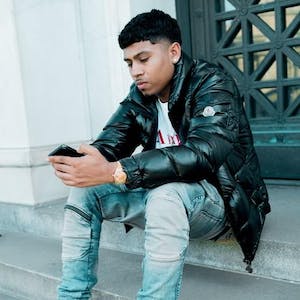 Tickets available at the Door!

Born and raised in San Francisco’s historic Fillmore district, rapper LaPrell Gilton—better known as Lil Pete— joins a lineage of notable artists who call the neighborhood home: Rappin’ 4 Tay, San Quinn and Messy Marv to name a few. Although he’s from the Bay, Lil Pete has worked to make his music bigger than that, not wanting to be pigeonholed as a local rapper.

The themes he touches in his music—like hustling, being on the streets—have an intense openness and honesty sometimes lacking in mainstream rap. The music video for 2017's “In This Life,” which has over 11 million views on YouTube, depicts poignant scenes of drug addiction, homelessness and the widening wealth gap eating away at the city. Lil Pete got his start in San Francisco, but it was really after he spent time in New York last year that he began developing the following he has now. There, the rapper collaborated with influential Southern rap artists like Juvenile and Bone Crusher, expanding his audience and his sound.

His older work, like the mixtape I Made a Promise, features the smooth, hyphy-inflected bounce many refer to as a “Bay Area sound.” And on his new album Hardaway, out Sept. 6 via Empire and Pete's own label, Public Housin', an amalgamation of melancholic, sing-song lyricism and minimal trap drums lend his storytelling a mainstream, radio-friendly appeal.

On Hardaway, Lil Pete takes command of his story for the first time. As someone who shies away from interviews—“A lot of people say I’m a closed-off person. Even though I make music, they don’t know a lot about me,” he admits—the album is a chance for Lil Pete to truly open up. “I’m telling them everything that happened in my life, what I’ve been seeing, what I’m going through now,” he says. “Hardaway is gonna give the fans more of my life and let them share my journey.”

A core part of that journey, naturally, has been Lil Pete’s community. With his Filipino, Mexican, Black and Native American heritage, the rapper identifies deeply with many cultural groups. He describes his neighborhood as “rough”—though he didn’t think so when he was young. But as Lil Pete got older, many of his childhood friends passed away, or ended up in jail.

Living in San Francisco today, Lil Pete recognizes familiar patterns of crime and violence. But rather than feeling distant or discouraged, the rapper views his position as an opportunity to use his music to uplift his neighborhood. “It inspires me to get big in the music industry and give back to the community and help,” he says.

To reach the level of exposure he hopes for, Lil Pete constantly pushes himself to broaden his music taste (A Boogie Wit Da Hoodie, Rihanna and PNB Rock are just a few artists he enjoys) and grow his style. He doesn’t want to pigeonhole himself solely as a street rapper, and wants to think bigger: “You know, sometimes rappers...feel like, 'Oh, I gotta rap about the streets, I gotta rap about this,'” he says. “But sometimes you don’t, you limiting yourself.”

Earlier this year, Lil Pete started Public Housin', a record label dedicated to giving opportunity to artists who come from communities like his. And as he continues to grow his following, he hopes to become a mainstream artist—to get even bigger so that he can help other rising artists from his hometown have their break in music too.

“A lot of people get to fame and don't come back, or don't show up for they city. But I feel like that's not right, so I’m always here. I got brothers and sisters out here,” he says.

“I always come back.”