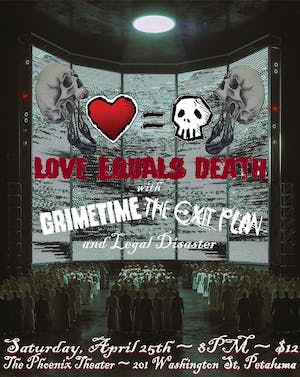 Hailing from Petaluma, CA, Love Equals Death's brand of rock draws influence from classic rock and horror-punk, and appropriately enough, the band marks its birthday on Halloween night 2003. Soon after forming, the quartet -- vocalist Chon Travis, bassist Dominic Davi (ex-Tsunami Bomb), guitarist Rosser, and drummer Tonio Garcia-Romero -- recorded a four-song EP, 4 Notes on a Dying Scale, on Popsmear and started making a name for itself around the Bay Area. Duffs then replaced Rosser on guitar, and more touring followed. Their next release, The Prelude, came out only in Japan in July 2005; the album contained demos along with their earlier EP. The Hucklebuck EP appeared in the U.S. the following month and, after impressing Fat Mike with their live show, Love Equals Death signed to Fat Wreck Chords. Their Bill Stevenson-produced Fat debut, Nightmerica, was issued in March 2006 on CD and vinyl. ~ Corey Apar, Rovi