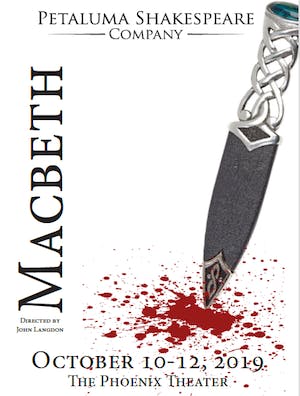 Three witches tell the Scottish general Macbeth that he will be King of Scotland. Encouraged by his wife, Macbeth kills the king, becomes the new king, and kills more people out of paranoia. Civil war erupts to overthrow Macbeth, resulting in more death.

Petaluma Shakespeare Company, the only free Shakespeare in Sonoma County, was founded in 2016 opening its first season of Free Shakespeare by the River at Foundry Wharf with “As You Like It”. In 2017 Free Shakespeare by the River picked up momentum and popularity presenting its second season with an abridged version of “A Mid Summer Night’s Dream” delighting some of the youngest audience members to date. PSC also offered its first Shakespeare Summer Camps for Youths, collaborated with teachers at various schools to help fulfill performing art requirements by the State of California and brought Shakespeare to life for their students. PSC has had the pleasure of collaborating with the Green Music Center and the Phoenix Theater as well as participation in the Butter and Eggs Day Parade. PSC is a 501(c)3 nonprofit organization.