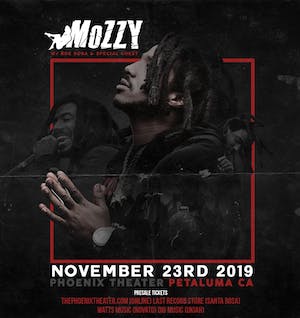 At the 60th annual Grammy Awards, Kendrick Lamar won best rap album of the year, and some of the first words out of his mouth weren’t his own, but Sacramento rapper Mozzy’s. He walked on to the grandiose stage, smirked and said, “Like my guy Mozzy say, ‘God up top all the time…’”

Then, a few days later, the name Mozzy could again be found tucked away on the tracklist for Black Panther: The Album, the soundtrack and corresponding movie that’s become a ubiquitous part of the Black History Month conversation with a buzz that's been a mainstay on the Twitter timeline for months. Mozzy’s name sits next to modern rap icons like Kendrick, Future, and Vince Staples.

So who is Mozzy, and why and how is he seemingly one of Kendrick's favorite rappers?​

Born Timothy Patterson, Mozzy is the 30-year-old rapper who’s probably better known to West Coast hip-hop denizens or rap fans who’ve been paying closer attention. He’s the wildly underrated Sacramento rapper, who has steadily averaged somewhere around six projects a year since 2015. He's also an incredibly endearing father of two, whose songs are in-depth, transparent narratives of what his life growing up in Sacramento has been like -- spanning the emotional spectrum via poignant introspection on subjects like random killings, drug abuse and jail time.

The MC says his lyrical honesty is an attempt to mirror the truth-telling of the legendary Tupac, who Mozzy pays homage to by showing “the realities that actually come with the gang banging... It’s political and it’s nurturing.” It’s all part of a recent metamorphosis that has led him away from lean and into a sobering fatherhood. “Get teary eyed about my daughter when I think about her,” he raps on his version of Future’s “Perkys Calling,” one of the bigger hits off 2016’s Fraternal Twins 2, with a video that has gained around 15 million views on YouTube.