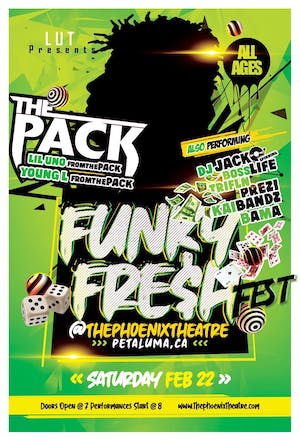 iCal
Google
The Pack with special guest Prezi and more!

The Pack is a hip hop group formed in Berkeley, California in 2004. The Pack expanded their fanbase and eventually got signed to a major label, when Too Short signed The Pack to his Jive Records-distributed label Up All Nite Records. The Pack is usually known for their skateboard raps and the sexually explicit content of many of their songs. The group is best known for the track "Vans". The Pack has also collaborated with musicians such as Soulja Boy, Wiz Khalifa, Dev, and The Cataracs.