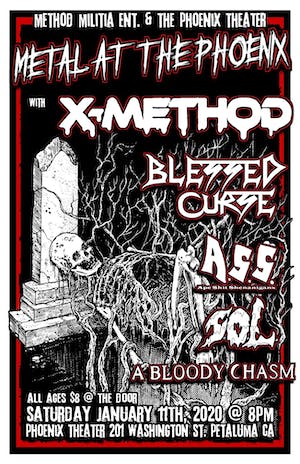 Tickets available at the door!

Metal at the Phoenix!

X-Method is a crossover band from the San Francisco Bay Area and Central Valley California, USA. The band has been together for approximately 3 years, but the concept of X-Method was born in 1999 by the lead singer Abby.

X-Method has released their debut album entitled, “Sex, Alcohol, Rebel Music”, and the album is a mixture of Hardcore, Heavy Metal, Thrash Metal, Hard Rock and a touch of Punk.

One year prior to the release of the full length album, X-Method released a 7 song E.P. entitled simply, “X-Method”, of which 1000 of loyal fans hold the only copies. Rock Syndicate Records has re-released this self-titled original in the spring of 2018 with 4 additional singles added to it.

X-Method gets radio request from listeners of shows like “Faces of Metal,” “Remains of Metal” in Mexico, “Adrenaline 101” in the United States, as well as many internet radio stations from around the world.

X-Method has toured in the United States, including some tour dates with the legendary D.R.I., they have toured South America twice and are embarking on their third U.S. tour and 1st European tour which kicks off in July 2018 at the Amplified Festival U.K.

The 2 songs, ‘WWX” and “Triangles and Sixes” portray not only the power of X-Method’s style but also live performances and the passion of their fans that call themselves “Method Militia.”

“Method Militia” consist of fans from The United States, Europe,South America and Asia. At any given time the Militia can log onto the fan page, Twitter, or Facebook and chat with either band member live in real time. You never know who is in the fan page. It could be the lead singer Abby, lead guitarist Tony, rhythm guitarist Chris, bass player Jordie, the drummer Ricardo, or all of them if you happen to catch them after practice or around show time. Feel free to visit them on the internet and like and share. X-Method looks forward to meeting you on the road and thank you for your continued support and don’t forget to follow X-Method on Spotify.

Blessed Curse, based in Sacramento California, have been making a name for themselves through selfless hard work, playing countless shows, and unleashing some of the most punishing true heavy metal. The band began with humble beginnings as childhood friends forging their love of music into their own band, and over the past 16 years they've grown to become a meticulous killing militia primed to join the bigger league and take things to a more international playing field.

Forming under the name "Atrosity" in 2001, the band recorded their debut 5-song E.P. in early 2005 after many formative years of learning old school metal classic tunes from the likes of Metallica, Iron Maiden, Slayer and Judas Priest. This 5-song EP, appropriately titled "Fuck Everything", was the group's first step in their long journey from leaving the confines of Colfax, CA to the world beyond as Atrosity quickly established themselves as the true, young thrash metal band in the Northern California area. 2005 also cemented the young band's reputation further as they opened for thrash metal legends Kreator and Overkill in Sacramento, CA giving them a taste of professional live performances.

In 2006, Atrostiy was forced to undergo a name change due to their being an established death metal band from Germany using the proper English spelling of Atrocity. Quickly deciding on the ultra-heavy alternate name of Devastator, the band continued the metal mayhem as the now revamped headbanging force and needed a release with the new name to get the word out to all the ravenous followers as well as potential new fans they would set out to convert. Devastator recorded a 5-song EP, titled "Crush and Kill", which was recorded completely live in the studio in two days. Released on Friday, October 13th, "Crush and Kill" quickly lived up and passed its predecessor to further spread the band's name and reputation. Devastator spent most of 2007 playing up and down California with fellow up and coming new thrash bands such as Merciless Death, Hatchet, and Warbringer, as well as with national touring acts such as Kreator (twice), Sodom, Three Inches of Blood, Napalm Death, Overkill (twice), Hirax, and Dragonlord.

In the fall of 2007, Devastator once again headed off to the studio, this time in Petaluma, CA, to record their follow-up EP, "Slaughtered Like Pigs", with the help of the then current drummer of Hatchet and Slave Productions. With their new recording Devastator joined their Bay Area brothers-in-arms Hatchet on a west coast tour blazing a path of destruction. Pushing ever forward, Devastator spent 2008 touring all over the west coast doing random dates alongside notable names like M.O.D., Heathen and Agent Steel, in addition to signing a publishing agreement with Marco Barbieri's Salem Rose Music.

In 2009, Devastator geared up to record their next demo recording, the far more professional "Burn the Beast" EP sessions at Trident Studios, which was recorded, mixed and mastered in a week by Juan Urteaga (Testament, Machine Head, Sadus). "Burn the Beast" received rave press reviews and metal radio airplay across the country and to build upon the momentum the band embarked on a full US tour that summer, dubbed the "Slaughtering the Masses" tour, spreading their music and making new fans in over 40 cities.

Upon returning home the band realized they had learned a lot from the experience and pulled back making themselves inactive despite a few one-off stints in 2010 from the aggressive live show routine and began making general improvements to their sound, musicianship, vocals and new material. Aiming to join the big leagues Devastator felt the need for another new name that was more unique and original and dubbed themselves Blessed Curse - because being in a band is both a blessing and a curse.

In 2011 with an arsenal of new songs the band headed back to Trident Studios with producer Juan Urteaga to record the full-length album of their self-titled Blessed Curse debut. True metal performed with integrity highlighting the band's distinct take on their metal influences and capturing the past, present and future of Blessed Curse. Packaged with a killer original artwork piece from Marc Sasso (Dio, Halford, Cage), Blessed Curse are ready to take it to the next level and have partnered with Cyclone Empire Records to make that next leap possible. Released in the US under Marco Barbieri's record label M-Theory Audio, the Blessed Curse debut album is available world-wide for the metal masses.

Since the completion of their debut, the band returned to the live front assaulting audiences with their intense barrage of metal mayhem and sharing stages all over the west coast with bands like Death Angel, Destruction, D.R.I., Evil Dead, Bonded by Blood, Exmortus, Sacrificial Slaughter, and Witchaven.

2016 has brought a new era to the band. Enlisting 6-string shredder Gregg Laubacher on guitar alongside original members Tyler Satterlee on guitar and vocals as well as Derek Bean on drums, B.C. completed the brand new recording titled "Beware of the Night" in 2017. Bringing the band back to Trident Studios with the work of Juan Urteaga the recording session marked the third experience of working at Trident and the result was the most punishing, crushing, and pummeling cut of sonic metal music that Blessed Curse has released to date. Bringing five new tracks to life including the first lyric video for the featured song "Nightbreed", Beware of the Night was released in the U.S. under the M-Theory Audio label. Pushing forward with new music and an even more fierce determination to bring B.C. to the wider world, countless shows and more headbanging music await the future of Blessed Curse.